Many times during my life I have asked this very question: “What’s it all about?”
Have you?
Life is a puzzle; a charade, a total labyrinth – yes, to be sure it is most definitely a labyrinth ….. an intricate combination of paths or passages in which it is difficult to find one’s way, or to reach the exit. So, what does one do whilst enveloped in this maze? Continue on, strive ever forward – and never let it defeat you!
That is what my current project is all about – refusing to allow the tragic crimes that have befallen me get the better of me and crush the life force from my soul. We are dealing with a time span of fifty years, so it is well and truly time to set the records straight!

For me to win this battle, I feel these crimes need to be exposed for the horror that they are, and justice needs to be served. So, that is my aim and intention – to force attention onto those who are put into positions to uphold law and order, and make these bureaucrats not only aware of what their system and their employees have allowed to slip underneath the levels of moral protection, but in so doing, force them to bring forth justice to my life.
I will persist until I succeed.
Quoting Sonny: “Everything will be all right in the end… if it’s not all right then it’s not yet the end.“

My tools of trade in this ensuing battle are writings, podcasts and videos – all used for me to tell the stories.
The philosophy I have carried with me since a young child has been: 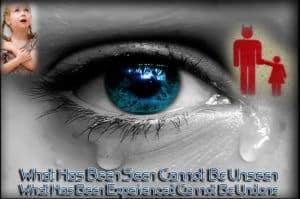 At the young and tender age of around seven or eight I was subjected to a great many years of cruel and despicable behaviour, brought down upon me by a man who was, in the eyes of others, a respectable man. He was a close friend of my family, who had been known to all since before my birth. After my parents divorced he became my mother’s boyfriend. This man betrayed the very essence of morality, subjecting me to seven or more torturous years at the whims of his depravity – until at the age of fifteen he released me from his wicked clutches.

His utterly reprehensible and wilful debauchery scarred me for life. For at least another fifteen years after he released his hold over me I struggled, both physically and mentally. The more I matured, the more  I became better able to cope and to live with my past. These crimes took place approximately between the years of 1959-1966. 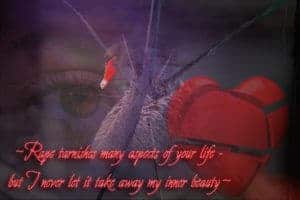 In June 1990 I was living alone with my young 2 year old boy, and I was about 18 weeks pregnant with my second child.  I was living in a house behind the Milk Bar that I was running.  Late at night someone broke in, attacking and raping me.  My young boy was also extremely traumatised.

The treatment I received from the CIB was almost worse than the rape itself!

I was subjected to absolutely emotionally cruel and objectionable behaviour by the CIB detective who attended after the rape. I was ridiculed, demoralised and spoken to offensively on many, many occasions. The case was never solved due to the dreadful miscarriage of justice by this detective. He was more interested in slandering me dreadfully, and blatantly committing perjury in court specifically to tarnish my character.

I fought the case for more than seven years, until finally, in the Supreme Court in 1998, it was declared that in fact I had been a victim and not a liar. But still no offender was looked for or questioned, let alone convicted. The Cold Case was opened in early 2014 – only to be again closed due to a lack of any leads. This rapist walks the streets as a free man to this very day! 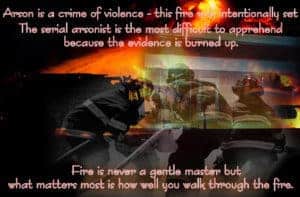 The third incident was not sexually connected, thank goodness! – but equally the police and authorities failed me substantially and allowed a criminal to get away with his actions, again without a satisfactory or thorough investigation.
In the late 1990s I owned and operated a Gallery in Warburton, Victoria, leasing a large old building in the township.
Then one night the building was on fire and I lost my business and most of my stock  – and of course my complete livelihood.  The landlord gained a newly refurbished building, although in his words to me just hours after the fire, he stated that it was a shame it had not burnt more fully as he would have far preferred to have had a totally new building under his insurance.

Again, even though there was mountains of evidence against the arsonist, the Forensic squad told me that there was nothing that could be done unless I had ‘actually seen the man strike the match’ – which I hadn’t – so therefore no action was taken against him. Outcome – yet a third criminal was allowed to continue to walk the streets as a free man!

JOIN ME IN MY WRITINGS TO LEARN ALL OF THE INTRICATE DETAILS
– AND WHERE I AM GOING FROM HERE.
I RELISH YOUR INPUT AND ASSISTANCE.

The movie ALFIE was released at around the same time I was released form the clutches of the paedophile who had harmed me for years prior. It has always resounded with me to keep delving until I find justice at the end!

What’s it all about, Alfie

Is it just for the moment we live
What’s it all about when you sort it out, Alfie
Are we meant to take more than we give
Or are we meant to be kind
And if only fools are kind, Alfie
Then I guess it’s wise to be cruel
And if life belongs only to the strong, Alfie
What will you lend on an old golden rule
As sure as I believe there’s a heaven above, Alfie
I know there’s something much more
Something even non-believers can believe in
I believe in love, Alfie
Without true love we just exist, Alfie
Until you find the love you’ve missed you’re nothing, Alfie
When you walk let your heart lead the way
And you’ll find love any day, Alfie, Alfie